The beginning of the end of working-from-home: Canary Wharf says ‘gradual’ return to office will start from March 29 expecting all staff to be back

The chief strategist at London’s Canary Wharf has said thousands of workers are expected to return to offices as Covid restrictions are eased in the coming months.

Howard Dawber, Canary Wharf Group’s head of strategy, said they are expecting numbers to increase from March 29 and that this will increase when services such as bars, restaurants and hairdressers open from June.

Speaking on the Radio 4 Today programme, Mr Dawber said the group expects to be back to 100 per cent occupancy over time with the return of its 120,000 office workers.

He said: ‘We’ve got about five or six thousand staff working on the wharf at the moment.

‘We expect over the next few months a gradual increase there – obviously the government’s advice is still to work from home and I think everyone is sticking to that.

‘But from March 29 onwards I think we will see people starting to return to the workplace and particularly as we get towards June when things like bars, restaurants, services, hairdressers open up I think we will start to see people back in offices and we are expecting significant numbers back over the summer.’

Mr Dawber went on to say that they expect to get back to original numbers even if that means some people work from home part-time while still having a desk at Canary Wharf.

He added: ‘Where the technology makes it possible to work from home, I think the processes and attitudes of businesses have caught up now to the point where I think it’s going to be more socially acceptable to take the occasional day working from home.

‘So it may well be that some people may have a desk at Canary Wharf but choose to work from home one day a week or a couple of days a month – and that’s a good thing.

‘We’ve got to the point where there is fatigue out there. Working from home last year when the sun was shining and people were perhaps enjoying a more flexible environment, there was a sense it was going to be a short-term process and we would get through it and return to work.

‘I think now people are missing that opportunity to collaborate and just see their friends in the office and to do all the life admin things you can do in a city centre.’

The Government did not set a date for when workers should return to the office when it revealed its roadmap out of lockdown last week.

It means the ‘work from home if you can’ message will continue to guide employers for the foreseeable future.

Many large firms have already told staff they should work remotely, with some even delaying a return to the office until at least the end of the year.

However, some studies claim that productivity is hampered as workers log in from their kitchen table rather than at their desk.

The work from home initiative has also seen footfall in the country’s town and city centres drop dramatically.

The High Street has been hard hit by the coronavirus pandemic as people were told to stay inside for several national lockdowns.

High Street stalwarts such as WH Smith and Clarks did not escape the bloodbath.

Last week, analysis from the Centre for Retail Research (CRR) showed 27,096 jobs have been shed and 1,023 stores have been earmarked for closure so far in 2021.

The research, which covers insolvencies by retailers with 10 or more stores, highlights the turmoil on the high street, which has seen the recent collapses of Debenhams and Sir Philip Green’s Arcadia Group.

Some companies which have closed stores this year so far include up-market stationary chain Paperchase which announced the closure of 37 stores and the loss of 500 jobs in early January.

Earlier this year, economists KPMG estimated that even after lockdown restrictions are lifted, shopper numbers could be a third below pre-pandemic levels as fewer people travel to work – and ecommerce booms.

It claimed high streets could lose between 20 per cent and 40 per cent of their shops – leading to as many as 400,000 jobs being axed.

KPMG said it was unlikely that office workers will return to commuting habits, with most expected to continue working remotely for part of the week as hard-hit businesses try to cut back on rent bills.

Economists at the company estimated this would reduce footfall to town and city centres by between 10 and 27 per cent on pre-Covid levels.

The report suggested that the lack of commuter flow into some towns cities would hurt the retailers and restaurants who are dependent on workers for sales.

Springboard, which collates footfall data, suggests there is a pent-up demand for town and city centres to reopen as figures show that despite all but essential stores closed, activity in UK destinations has increased from week to week for the past six weeks.

Footfall increased on all but one day last week, with a very clear acceleration in activity on Friday and Saturday as the weather improved and consumers looked to make the most of the weekend.

The firm says the figures suggest shoppers are experiencing ‘lockdown fatigue’ and it is estimated that when non-essential retail and outdoor hospitality reopens in England from 12 April, footfall across the UK will rise by up to 47.9 per cent in the first trading week.

‘Perhaps prompted by the announcement of the government’s roadmap to reopening at the beginning of the week, but then supported by drier warmer weather in the second half of the week, footfall in UK retail destinations rose once again last week from the week before.

‘Not only was this the sixth consecutive week that footfall has increased, but its magnitude was greater than in any previous week and nearly twice that in the week before.’

Meanwhile, businesses based at Canary Wharf have said they will follow Government guidance in deciding when to send staff back to the office.

A KPMG UK spokesperson said: ‘Our key priority remains our colleagues’ health and wellbeing and as a firm we have stringently followed the most up-to-date scientific and government advice, including these latest developments.

‘The vast majority of our people will continue to work from home, but our offices remain open for those who have a business or wellbeing need.

‘All colleagues looking to enter our offices or a client site will continue to use our UK Return App, a risk assessment that ensures our people are in a safe position to return and are comfortable doing so.’ 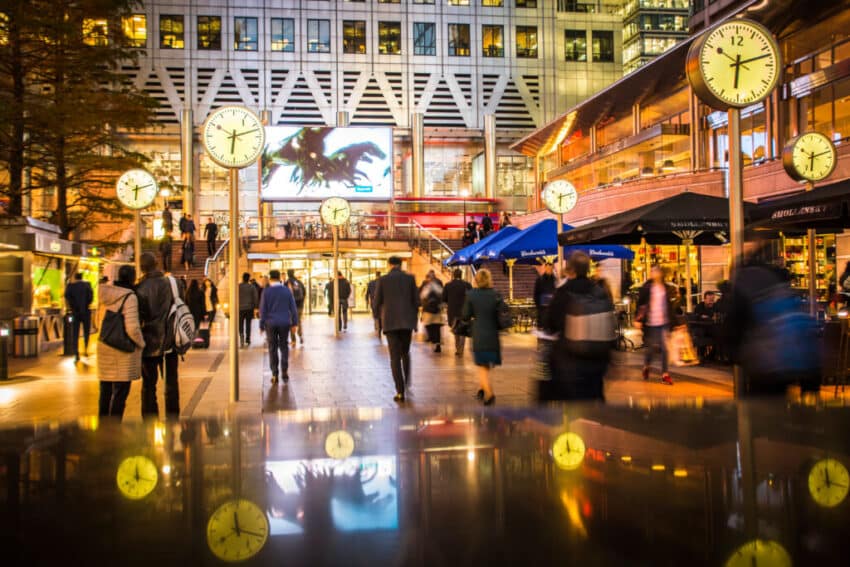 However, Richard Alvin, group managing director of Capital Business Media – publishers of Business Matters – which is based at Canary Wharf , said that he believes that there is ‘zero chance’ of 100 per cent of the staff at other businesses they share the business estate going back into the office 100 per cent of the time and that they will continue to operate on a hybrid model that his  company has operated on for the past decade was more likely.

Prime Minister Boris Johnson revealed the Government’s roadmap out of lockdown with schools expected to return next week on March 8.

The next stage of loosening will not be until March 29, when the formal Stay at Home edict is finally dropped in favour of ‘Stay Local’, and the Rule of Six makes a comeback.

It will be extended to allow two households to gather, enabling relatives to meet properly for the first time in months.

That date will also see the reopening of tennis courts and golf courses and the return of grassroots football.

But shops, hairdressers and pubs must remain closed until April 12 at the earliest – the same time gyms can get back up and running – regardless of mounting fears about the economic meltdown. Even at that point pints and meals can only be consumed outdoors.

Campsites and holiday lets can reopen for single households from April 12 – but international travel is completely off the cards until at least May 17.

Social distancing rules will stay in force until June 21 at the minimum, with a government review to decide their future after that.

The decision means that grandparents face months of waiting before they can hug their grandchildren – even though millions have already been vaccinated.

Sports can start to return from May 17, although venues will need to work on reduced capacities.

Up to 30 people can go to weddings from the same date, but are stuck at that number until the next phase of the roadmap.

Only at June 21 will all legal limits on social contact go, and the remaining elements of the hospitality sector be allowed to open.

The PM stressed that he is being driven by ‘data not dates’ and the timeline is not guaranteed.