What we know about Sean Conley, Trump’s doctor and the first D.O. to serve as physician to the president

Since President Trump announced his COVID-19 diagnosis Friday, Americans have looked to one man for reassurance about the commander-in-chief’s condition: Dr. Sean Conley, White House physician since 2018.

But following a press conference Saturday at Walter Reed National Military Medical Center in which he failed to answer some basic questions about Trump’s condition — including whether the president needed supplemental oxygen — Conley raised eyebrows among other doctors.

“A lot of clinicians listening to the news story were really surprised by the lack of transparency, sort of a somewhat disorganized, presentation of clinical information. It was veiled and not logical and not easy to follow,” Peter Chin-Hong, professor of medicine and infectious disease specialist at University of California San Francisco, told Business Insider.

That prompted questions about Conley’s qualifications, especially after the physician agreed to have Trump take the unproven coronavirus drug, hydroxychloroquine, in May.

“I think there’ve been some inconsistencies that many people have wondered about. For instance, the embracing of hydroxychloroquine when, in the initial time when the President took it, I think that many clinicians wouldn’t do that,” Chin-Hong added.

Here’s what to know about Conley’s medical training, and how he became Trump’s doctor.

He has an extensive military history 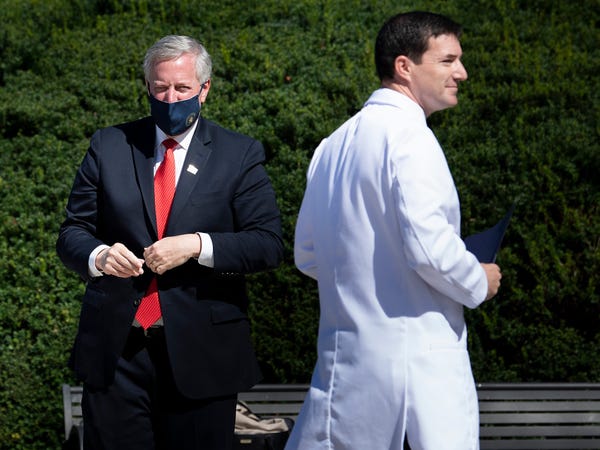 According to Conley’s LinkedIn profile, he’s been an emergency physician with the US Navy since 2006. But the timeline of Conley’s medical training is more complicated than that.

After obtaining a Bachelor’s of Science at Notre Dame University, Conley graduated from the Philadelphia College of Osteopathic Medicine.

His then completed a three-year medical residency at the Naval Medical Center in Portsmouth, Virginia before being deployed to a NATO hospital in Afghanistan for seven months.

Returning to Portsmouth in 2014, Conley then served in a variety of roles at the Naval Medical Center before joining the White House staff four years later.

Dr. Ronny Jackson, a retired Navy rear admiral who served as the president’s physician from 2013 to 2018, handpicked Conley to be his successor, NBC News reported.

Two anonymous sources told NBC News in May that many people within the White House Medical Unit saw Conley as having been unfairly promoted to the job of physician to the president without proper vetting.

Conley doesn’t have an MD, or Doctor of Medicine, degree like Jackson does.

Instead, Conley graduated with a Doctor of Osteopathic Medicine degree, or a DO, and seems to be the first DO to serve as the president’s physician since Congress established the position in 1982.

The focus of a DO is to emphasize a “whole-body” approach, looking at holistic medicine and disease prevention to treat a patient ailments, rather than isolating specific symptoms.

Unlike naturopaths, however, they get licensed by the same state boards as MDs, have near-identical training, and can prescribe medications and treat patients in all 50 states.

Historically, DOs may offer manual treatment on muscles and joints (known as osteopathic manipulative treatment, or OMT), while MDs typically refer patients to a physical therapist or prescribe medications. Recently, the treatment lines have started to blur, because MDs are being trained in and using more of a whole body approach now, and DOs are using less OMT in visits.

But Chin-Hong said the concern over the type of Conley’s medical degree is unwarranted: “This is not a time to be divisive about MD versus DO.”

DOs receive the same amount of training as MDs do: They complete pre-med course work as undergraduates, take the MCAT exam, and attend medical school for four years before completing a multi-year residency program.

DO degrees include an additional 200 hours of coursework beyond the general medical school curriculum that focuses on muscles and nerves, to learn how to perform OMT.

These massage techniques help DOs diagnose illness or injury, and enable physicians help their patients’ bodies self- heal. MDs, by contrast, study allopathic medicine, which is based on treating specific symptoms with their remedies.

“In the past, maybe people had conceived ideas about MD versus DO, but I would say in modern medicine, at least in San Francisco, by the time they reach up to, you know, the level of your colleagues, it’s pretty much indistinguishable,” he said.

That being said, Chin-Hong said there are aspects of Conley’s recent medical track record that are worrisome.

In May, Conley issued a memorandum confirming he’d approved Trump’s use of the malaria drug hydroxychloroquine as a preventive measure against COVID-19 after the president touted it as a pandemic “game changer.”

“After numerous discussions he and I had regarding the evidence for and against the use of hydroxychloroquine, we concluded the potential benefit from treatment outweighed the relative risk,” Conley wrote.

“At that point, when President Trump took the initial course of hydroxychloroquine, there was ample evidence already — and now there’s even more — that there was no benefits, in fact, there was a lot of potential harm in cardiac arrhythmias or other adverse effects,” Chin-Hong said.

Trump’s support for hydroxychloroquine, an antimalarial drug, started in March, when a French study suggested it could be effective against the coronavirus and the drug received emergency authorization from the US Food and Drug Administration. Later, the journal that published the findings suggested the study was poorly done.

In the months that followed, multiple studies showed the drug didn’t prevent coronavirus infections in people who were recently exposed to the virus, or decrease the severity of symptoms.

A month after Trump’s 10-day hydroxychloroquine treatment, the FDA revoked the drug’s emergency approval, citing a lack of evidence showing the drug worked.

The National Institutes of Health also recommends against the use of hydroxychloroquine in its coronavirus treatment guidelines.

Conley held a briefing on Saturday for the first time since Trump’s coronavirus diagnosis. But in it, he evaded many critical questions. He wouldn’t say whether Trump had at any point received supplemental oxygen, when the president last tested negative, or what temperature his fever reached.

While Conley answered the first of those three questions during a follow-up press conference Sunday morning, the fact remains that it’s difficult to discern key details about the president’s condition.

“Traditionally, anyway, when presidents have been sick, the public actually gets a lot of information about the leader of the country,” Chin-Hong said. “Because it has to do with the security of the country, whether we feel, you know, confident that our country is being ruled with the right structure at right time.”

Conley failed to do that on Saturday as he addressed reporters and sidestepped questions about what prompted Trump’s helicopter flight to Walter Reed National Military Medical Center, according to Chin-Hong, who has been caring for COVID-19 patients throughout the pandemic.

“I think probably the most glaring absence was the dancing around with the discussion around oxygen requirements. The reporters kept asking him about oxygen and trying to get more and more specific. But he always came back to the point that he’s not on oxygen now,” Chin-Hong said.

Blood-oxygen readings can help flag serious cases even before a person has developed severe symptoms like shortness of breath. They can also signal to patients when it’s time to go to the hospital.

But some of Conley’s vagueness surrounding Trump’s health may be a result of pressure from his patient, Chin-Hong said.